Growing dahlias is easy, and any beginner can handle it. For the first time, dahlias were brought to Europe from America several centuries ago, and over this time, they have managed to adapt to various climatic conditions and spread everywhere from Scotland to Japan. 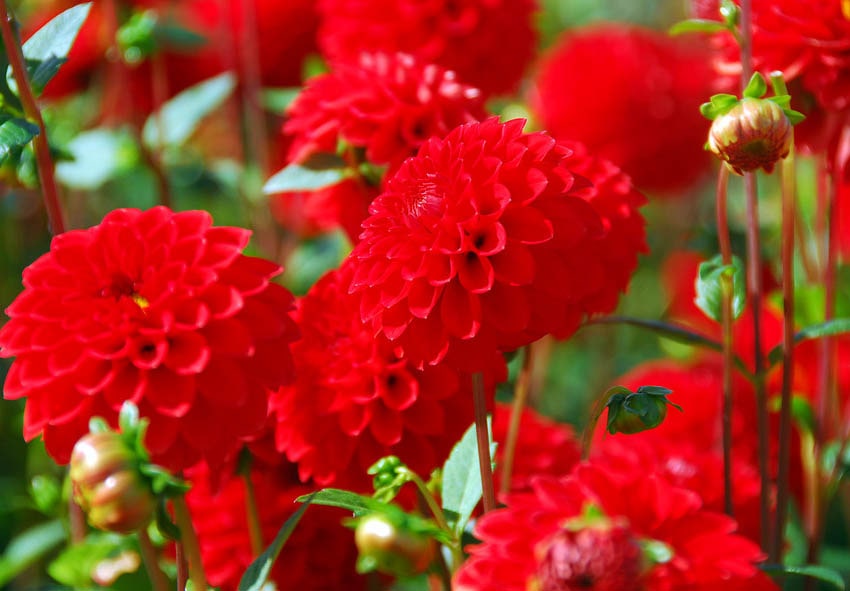 Dahlias are perennials,  which attracts numerous gardeners to this plant. Varieties of dahlias are very diverse in the color of the inflorescences: from red and white to yellow to maroon and purple, plain, two-tone, or with stripes and strokes. The division into groups is based on the principle of differences in the structure of the inflorescence.

In order for your dahlias to form a lush bush and bloom properly, you need to choose the right place, germinate root tubers in advance, and know some rules for planting dahlias in the garden.

When To Plant Dahlia Tubers

When to plant dahlia bulbs? In mild climate zones, dahlias are planted in late May or early June. At the end of May, ungrown tubers with sprouts can be planted. And grown tubers and rooted cuttings are planted in June when there will definitely be no frost. When do dahlia bloom? Most varieties present their flowers from July until late autumn.

Where to Plant Dahlias

The area where the dahlias grow should be flat (it is better to choose a south or southeast slope) and well protected from the wind. It does not make sense to plant dahlias in valleys and hollows, where cold air accumulates and late frosts are common. In the shade, dahlias also stand no chance — they bloom poorly and do not produce tubers suitable for planting. They also cannot handle close proximity to groundwater. For dahlias, choose sites with rich garden soil and follow a few simple planting guidelines. 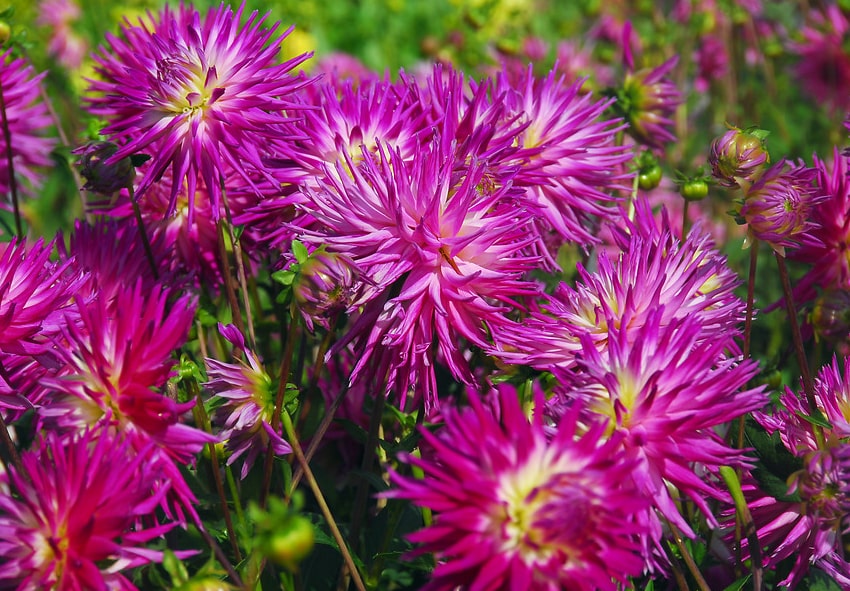 It is essential to pay close attention to the soil in which dahlias are grown. For successful flowering, the soil should be moderately moist (but not dry) and permeable (not heavy). Heavy soils are not suitable for dahlias. In no case should the soil be wet. This can cause the tubers to rot. Oversaturation of the soil with fertilizers leads to plant diseases.

In combination with perennials, you can focus on dahlias and use perennials as an accompaniment. Dazzlingly incendiary dahlias with powerful ornamental grasses such as Chinese miscanthus look spectacular. Their fluffy foliage wonderfully softens bright colors, thereby increasing the picturesque effect.

If you like fiery colors, create a colorful flower garden by planting a tall three-lobed rudbeckia (Rudbeckia triloba) with scarlet dahlias, blooming from July until frost with golden flowers. Do not worry about the fact that rudbeckia is an annual plant as it reproduces well by self-sowing.

How Deep to Plant Dahlias

If you are wondering how to plant dahlias, don’t worry as it is quite simple. Dig holes and place stakes in them. The distance between plants should be from 60 centimeters to 1 meter, with at least a meter between rows. Plant cuttings of dahlias two in one hole, to a depth of 8 to 10 centimeters (up to the first pair of lower leaves).

What to do when you plant dahlia tubers? When planting dahlia tubers, make sure that the root neck is at a depth of 5 to 8 centimeters. After planting, gently compact the soil with your hands, immediately tie the plants to stakes, and water well. As they grow, they will need to be tied up two to three more times.

It is very important to protect dahlias from snails and slugs, especially when tiny shoots are breaking out of the soil. Many gardeners start fighting snails only when the sprouted shoots are already clearly visible. However, it is possible that the critical moment has already been missed at this point.

When Should I Water My Dahlia Plants?

Dahlias should be watered abundantly and regularly. How often to do this depends on the temperature and humidity of the air. In dry and hot weather, in the first week after planting, dahlias are watered daily, then less often, but the soil under the plants should always be moist. Otherwise, dahlias will not grow as well and fewer flower buds will appear on them.

After each watering or top dressing, the ground under the dahlias must be loosened and weeds should be removed. Better yet, immediately sprinkle the soil with humus or peat. That way it will not be covered with a crust, and you will not have to water the plants so often.

How to Plant Dahlia Tubers and Grow Them Correctly

In order to get beautiful and healthy plants, we’ve prepared several simple tips on how to care for dahlias.

1. How to form dahlias

As they grow, dahlias form. For those grown from a tuber, leave the two strongest shoots and remove the rest as early as possible. In cuttings, one stem is usually left, but sometimes, in order to make the bush more magnificent, the top is pinched over the third pair of leaves from the bottom and the plant develops into two stems.

2. How to get the largest dahlia inflorescences

If you want the inflorescences of large-flowered varieties to be larger, remove all side shoots that appear from the leaf axils. In varieties with a powerful bush, the lower leaves should be cut off at a level of 30 to 40 centimeters. Then the bush is better ventilated, and the stem at the base of the root collar does not grow. All small-flowered varieties of dahlias are not formed.

3. The subtleties of caring for border dahlias

Fertilizers are applied only at planting — directly into the hole — and during the season, border dahlias are no longer fed to avoid foliage growth at the expense of flowering and in order to maintain a compact, low form. The planting distance is 40 centimeters. Water rarely, but plentifully, and spray in the heat. Axillary shoots are not removed. Only faded baskets are cut off.