All about Iris as a flower bulb

Iris: the flower with a message

The Iris is not only unique; you could even call it magical. It can be found in every colour of the rainbow including the most stunning colour of all: blue. Did you know that there are both large-flowering and small-flowering irises? 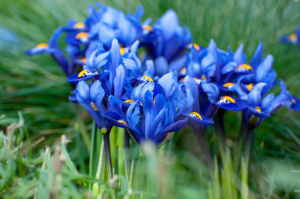 The name ‘iris’ is Greek for ‘rainbow’. And a very apt name it is since irises come in every colour of the rainbow. Besides the literal meaning of the word ‘iris’, Iris is also a character from Greek mythology. This was the goddess who transferred messages between the gods and people. To do so, she slipped down from heaven to earth on a rainbow. And this is also the source of the Iris’ symbolic meaning: ‘I have a message for you’.

Straight into its heart

The enchanting Iris belongs to the Iris family and was first mentioned around 1500 BC. This charismatic flower has three petals. As it opens slowly but surely, you can you look straight into its heart. The natural beauty of irises adds a beguiling element to a garden, and their colours are bright and expressive. In addition to their various blues, irises are also available in yellow, lilac, purple, brown and white. Some even sport two colours.

If you want to enjoy magnificent irises in your garden early in the spring, be sure to plant them in the autumn. Large-flowering irises should be planted in a sunny position, at a depth of 5 centimetres and at 8 centimetres apart. If your region has harsh winters, protect them with a layer of straw. Small-flowering irises will bloom profusely in either sunny or semi-shady locations. Plant these bulbs three times as deep as they are tall. To create a pretty carpet of flowers in the garden, plant them in dense clusters.